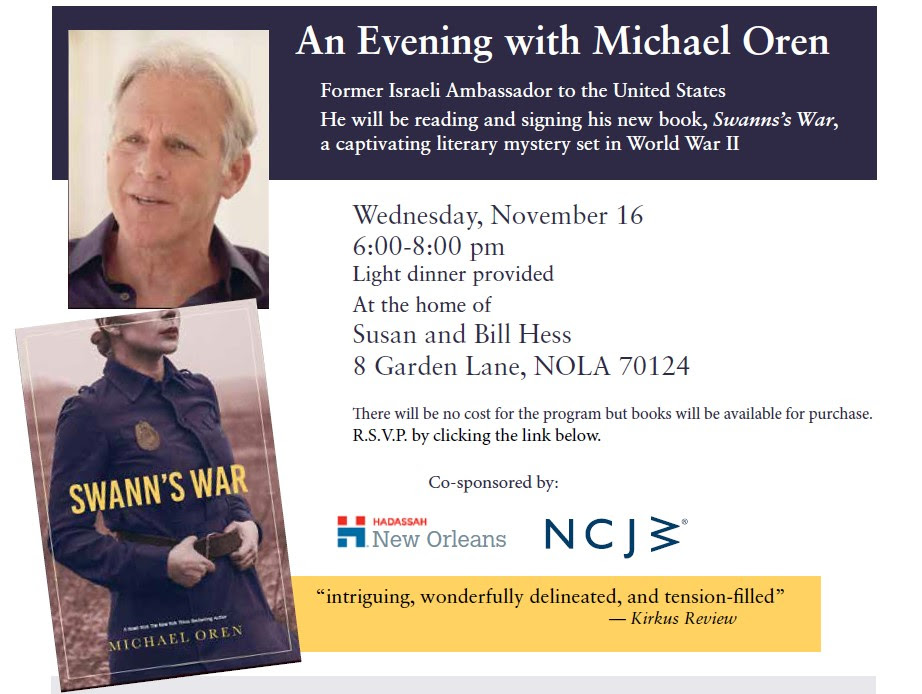 There will be no cost for the program, but

R.S.V.P. required by clicking the link below.
Books will be available for purchase.
Questions? Contact Susan Hess at carliesue@aol.com or 504-615-5294

More About the Author:
Michael Oren

Statesman, historian, soldier, author, Michael Oren has had a long and distinguished career, including serving as the Israeli Ambassador to the United States.

Born in New York and educated at Princeton and Columbia, he was a visiting professor at Harvard, Yale, and Georgetown. He holds four degrees in Middle East history and has received four honorary doctorates.

Moving to Israel in the 1970s and joining the IDF, Dr. Oren served as a lone soldier in the paratroopers. He fought in the 1982 Lebanon War, and later served as an army spokesman in the Second Lebanon War and several Gaza operations, reaching the rank of major.

In 2009, Michael Oren was appointed Israel’s ambassador to the United States, dealing with crucial strategic issues such as the Iron Dome defense system and the Iran nuclear threat. For his service he received the Statesman of the Year Medal from the Washington Institute for Near East Policy and the Dr. Martin Luther King Legacy Prize for International Service.

Oren has written numerous bestselling nonfiction books, while throughout he has been a writer of fiction. His latest novel, Swann’s War, was hailed by Kirkus Review as “intriguing, wonderfully delineated, and tension-filled,” and awarded it the coveted star.

A prominent figure in the media, serving as Middle East analyst for both CNN and CBS news, Oren has appeared on numerous national television shows. His essays and op-eds have appeared in The New York Times, The Wall Street Journal, and the Atlantic; NPR listed him among the best college commencement speakers ever.